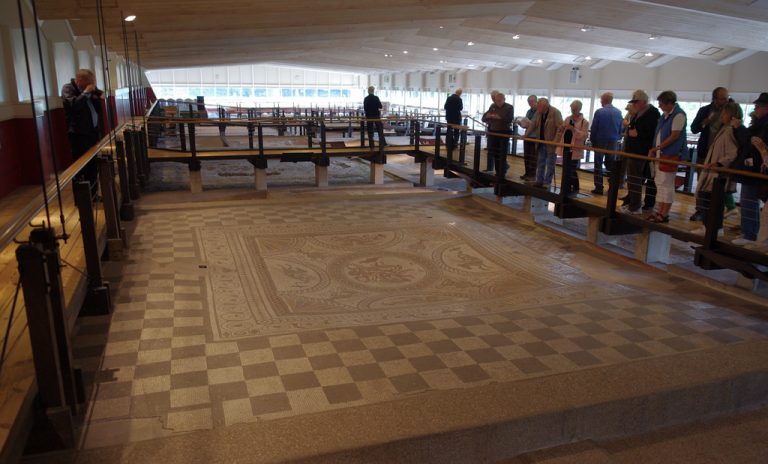 Previous Next
Place Categories: Castles and Palaces Near Me Indoor and Outdoor Museums and Art Galleries Near MePlace Tags: Ages 4+

The Fishbourne Roman Palace was accidentally discovered by construction workers digging in 1960. The site moved from a military base during the Roman invasion in AD 43 to a magnificent Palace by the end of the first century, according to current excavations! Now open to your family’s exploration and leisure!
The site museum includes fascinating finds from the excavations, as well as plans, reconstruction sketches, and models! The known story of the structures and times is told in an easy-to-understand audio-visual exhibit designed for families.:

Fishbourne Roman Palace has not told us about their parking.

Are there toilets available

Yes, there are toilets and accessible toilets.

No, there are no baby changing facilities.

Can I bring my own food

Fishbourne Roman Palace has not told us if you can bring a picnic.

Is there food available to buy

Fishbourne Roman Palace has not told us about their dining options.

No, Fishbourne Roman Palace have stated they are not pushchair friendly.

Can I take my dog

Fishbourne Roman Palace has not told us if they are dog friendly.

Sorry, no records were found. Please adjust your search criteria and try again.

Previous
Next
We use cookies on our website to give you the most relevant experience by remembering your preferences and repeat visits. By clicking “Accept All”, you consent to the use of ALL the cookies. However, you may visit "Cookie Settings" to provide a controlled consent.
Cookie SettingsAccept All
Manage consent

This website uses cookies to improve your experience while you navigate through the website. Out of these, the cookies that are categorized as necessary are stored on your browser as they are essential for the working of basic functionalities of the website. We also use third-party cookies that help us analyze and understand how you use this website. These cookies will be stored in your browser only with your consent. You also have the option to opt-out of these cookies. But opting out of some of these cookies may affect your browsing experience.
Necessary Always Enabled
Necessary cookies are absolutely essential for the website to function properly. These cookies ensure basic functionalities and security features of the website, anonymously.
Functional
Functional cookies help to perform certain functionalities like sharing the content of the website on social media platforms, collect feedbacks, and other third-party features.
Performance
Performance cookies are used to understand and analyze the key performance indexes of the website which helps in delivering a better user experience for the visitors.
Analytics
Analytical cookies are used to understand how visitors interact with the website. These cookies help provide information on metrics the number of visitors, bounce rate, traffic source, etc.
Advertisement
Advertisement cookies are used to provide visitors with relevant ads and marketing campaigns. These cookies track visitors across websites and collect information to provide customized ads.
Others
Other uncategorized cookies are those that are being analyzed and have not been classified into a category as yet.
SAVE & ACCEPT